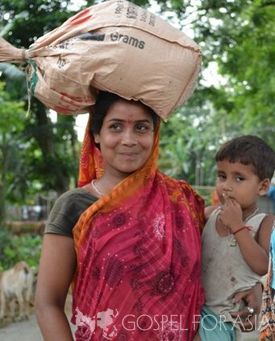 Jisha was obviously pregnant, but she hardly had enough food for one—much less two. Floodwaters had torn away her home, and now she looked out anxiously from a neighborhood of makeshift shanties on the side of the road. She and the others should have been easy to find, but a week after setting up camp, no one had come to help.

“We don’t have anything to eat or drink,” she told Al Jazeera News. “I need medicine desperately, but there aren’t any clinics here since everything was washed away.”

Although it comes every year, this monsoon season caught many by surprise. Areas normally left unscathed were destroyed when the enormous Brahmaputra River overflowed with rainwater and broke through the dikes that had strained to hold it in.

In just over a day, more than 80 villages in the Indian state of Assam were underwater. Villagers scrambled to rooftops or ran for higher ground, bringing whatever possessions they could carry. Those who weren’t swept away watched their homes, jobs and way of life vanish.

Four weeks and 126 deaths later, as the rain continues, more than 2 million people now wonder if they will ever return home and how they will rebuild their lives. And north of India, Nepal’s citizens are asking the same questions.

“Murky water entered our house suddenly in the night,” a man named Dilli told the Republica newspaper. “We survived by climbing to the rooftop. Three oxen, sheep and stored paddy [rice] and wheat were all swept away.”

No one in Dilli’s district has seen a monsoon season like this in 50 years. Three thousand houses are flooded, but the number of homeless families keeps growing.

Across Nepal and Assam, the schools that remain have opened their doors as relief camps, but there isn’t enough food for large families, and many are held back by washed-out roads and lack of boats.

Amidst the despair, though, a familiar sight is bringing hope.

After the initial flooding, Gospel for Asia-supported Pastor Vamsi went to survey the devastation in Assam. At the sight of demolished concrete houses, animal carcasses floating on the water and relief camps full of homeless survivors, he returned to his office and called an emergency meeting.

Stretching their funds as far as possible, Vamsi and his church bought daily essentials and distributed them among the camps. Other pastors in the area took boats to families stranded in their homes and supplied food, blankets, medicine and soap to cut down on infection.

Filling empty stomachs, providing warmth and listening as victims share their plight is an expected part of monsoon season for pastors in Asia like Vamsi. Last year, they responded to floods in Pakistan and Sri Lanka by giving away care packages and even drilling Jesus wells so fewer people would have to drink contaminated water.

After floods, tsunamis and cyclones, Compassion Services teams quickly get to work and don’t stop until they’ve helped rebuild homes, reestablished livelihoods and made it clear that their care comes from Jesus.

“Many people are coming and help us and leaving, but we’ve never seen people like you,” said a tsunami survivor. “You care about us and encourage us. We see some kind of love in your lives.”

Through the Compassion Services teams’ efforts, thousands of expectant moms like Jisha and farmers like Dilli experience the incredible love of Christ, but millions still cry out for relief.