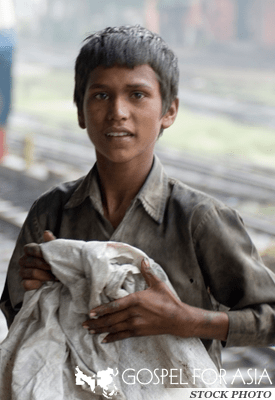 The man stared at the boy he had just run over with his vehicle. The child looked helpless, lying on the street, a bloody mess—so he fled and left the boy to die. But the injured boy was not just a mangled body—he had a name, and there was more to his story.

His name was Nandi, and he was 12 years old. He doesn’t remember how he ended up on the streets. He only remembers at a young age, he got on a train and ended up on the streets of a larger state in India. It’s suspected he was possibly sold, abandoned or abducted.  Because he was on his own and handicapped due to polio, a man began using him to beg. He spent his days stretching out his hand at traffic lights, only to give most of the money he made to the man when the day was over. Nandi was left with very little money to survive on, so he kept working for this man who had many other abandoned children doing the same thing.

It was after a day of begging that Nandi was struck by a car and left on the road, barely hanging onto his life. A woman saw his helpless condition and immediately took him to the hospital, where he received medical attention. He stayed in the hospital for several months while his body recovered.

Once Nandi was well enough to leave the hospital, he was sent to a Gospel for Asia home for street children.

“Seeing Nandi today, we would never imagine that once he lived in such a pitiful condition,” said a Gospel for Asia correspondent.

Nandi is now eager to go to school each day and happily participates with the other children in their activities, like dancing and performing skits.

The staff members at the children’s home are currently working to enroll Nandi in a school specialized to help him learn and grow most effectively.

The boy who was once so close to death has now been given a radically different life—and the opportunity to learn about the amazing love of Christ.

Learn what Gospel for Asia workers are doing to help these precious children.