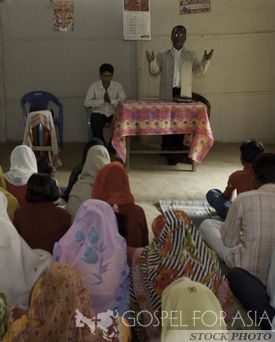 Teenaged Mila came to her pastor in tears. He had been wondering why she stopped attending church, so she explained what had taken place in her home recently.

Mila had chosen to follow the Lord after one of her school friends shared a New Testament with her. Mila eagerly soaked up all she could at Gospel for Asia-supported Pastor Chhiring’s church, and she developed friendships with other believers there.

But Mila’s father, Dharmesh, started wondering where she was going on the weekends. When he found out, he became very angry. He confronted Mila, saying their family was committed to the local religion and she must conform to the rituals. When this didn’t deter her, Dharmesh beat his daughter and tore her Bible, threatening to go to the church and injure someone else.

Then Mila grew afraid. Her father’s threats intimidated her, so the next Sunday, she stayed home.

Dharmesh held fast to his anti-Christian stance. One day, he noticed some small red patches on his hands and feet that started itching. The patches didn’t heal, even after he visited a doctor, and the itching started to really bother him.

Dharmesh turned to the traditional healers of his village, making offerings in hopes of healing. But nothing changed. Mila offered to pray for her father, but Dharmesh refused. Instead, he and his wife traveled to the city to seek hospital treatment.

When the hospital’s doctors failed to help, Dharmesh, miserable and desperate, at last agreed to let his daughter pray for him.

Mila excitedly invited Pastor Chhiring to join them. Full of remorse, Dharmesh apologized to the pastor for his opposition. They prayed together, believing the pastor’s words that nothing is impossible with Christ.

That day changed Dharmesh forever. As his heart began softening to understand and embrace Christ’s love for him, his skin disease began fading away.

Rejoicing in the faithfulness of God, Dharmesh and his entire family chose to join Mila at Pastor Chhiring’s church. In time, he experienced complete healing and has become an example for other believers as he participates faithfully in church activities.