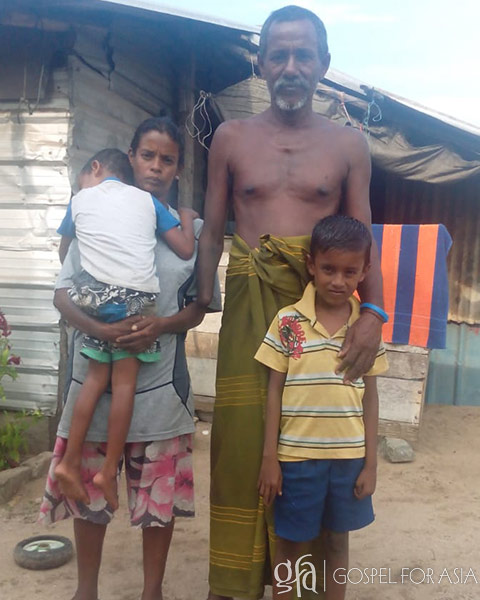 Khanjana and his family pose outside their hut, a gathering place where villagers can learn they were created in God’s image.

As a lonely fisherman, it seemed life had little to offer Khanjana besides hard work and the derision of society. Khanjana adopted the worth others had assigned to him, which was diminutive. The rejection and isolation he and his family faced crushed his spirit. Khanjana wanted more for his two sons, but it seemed no one cared about, or even noticed, his family.

Khanjana possessed none of the values people in his society esteemed. He had no wealth; he was a lowly fisherman living in poverty. He had no formal education; he learned the fishing trade from his father. He had a physical disability; he had lost his right hand in a fishing accident.

As a result, the family was despised in the community, and no one came to visit their small hut. Even the leaders of Khanjana’s traditional religion kept their distance, choosing instead to visit the wealthier members of the community.

One day, as Khanjana walked from his home to the beach to begin fishing, he saw GFA pastor Hamraj talking with some of his neighbors. Khanjana expected the pastor to have the same reaction toward him as everyone else—rejection. But instead of turning the opposite direction, Pastor Hamraj came toward Khanjana and greeted him!

This simple gesture was a balm to Khanjana’s lonely soul.

He was elated to talk with Pastor Hamraj and invited the pastor and the group of young people with him to his home. He was surprised they agreed to come, even after they discovered he lived in the fishing community.

Their acceptance was a gift Khanjana thought he would never receive. For the first time, Khanjana and his family were able to welcome guests into their home.

The visit was a blessing, and it turned out to be one of the few joyful days the family had experienced in a while. Pastor Hamraj prayed for Khanjana’s family and invited them to his church for a worship service. Before leaving, the pastor assured the family he would come again.

And he did. During his visits, Pastor Hamraj explained that God created Khanjana in His image and loved Khanjana more than he could fathom. To his amazement, Khanjana learned that he has great value, even when others fail to recognize it. Khanjana and his wife decided they wanted to have a weekly prayer meeting in their home to learn more about this God who loves them and declares their value. Soon, Khanjana’s depression turned to joy and his worries turned to peace as he grew in his relationship with God.

Their weekly prayer meeting began to draw people, and Khanjana’s little hut, once a sad reminder of others’ rejection, became filled with joyous worship and the prayers of a dozen people. Even neighbors who previously disliked and avoided Khanjana journeyed to his home to attend the prayer meeting. He welcomed them with an open door and an open heart.

“First, nobody cared for me or took notice of me because I am a disabled and poor fisherman. God loves me, and through Pastor Hamraj, I learned about the love of God and how much He cares for me and my family,” Khanjana said. “I now have peace in my heart and am not sad anymore. God is blessing me and my family. … I want to serve God till my last day with a thankful spirit for what He has done for me. I will also teach my sons to follow in the footsteps of Jesus.”

Please pray for Khanjana’s community as people continue to learn about their own worth and the value of others through God’s eyes.

Read another man’s journey from loneliness to love in Christ.