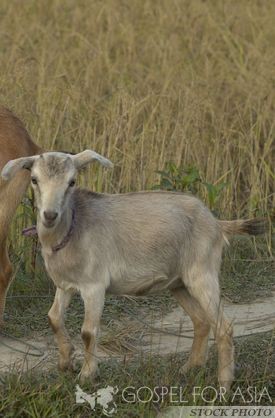 When local witch doctors and villagers realized their powers were no longer working, they immediately blamed Gospel for Asia pastor Ghalib. Ever since Ghalib had started sharing about the God of the Bible, things in the village had changed. Men and women were leaving the traditional religion of the community to follow Jesus, which was frowned upon by their neighbors and leaders.

The local people plotted against the pastor, but none of their plans succeeded. Lomash, the head of the village, got a group of people together to harass Pastor Ghalib about a recent theft in their community.

Two goats had been stolen, and the already-irritated villagers accused Pastor Ghalib and his church of stealing them. Although Pastor Ghalib calmly explained that his congregation had nothing to do with the crime, the furious villagers did not back down. Their accusations quickly turned into threats.

“We need our goats returned immediately. Otherwise, none of your believers will escape our harm,” the group said to Ghalib.

Pastor Ghalib suggested they hold an inquiry over the matter, but instead, the group told everyone else in the area the church was responsible for the missing goats.

Pastor Ghalib and his congregation were disgraced, and they continually asked God to intervene in the matter.

Finally, about a month after the local people had confronted Pastor Ghalib, the truth came out about who had been stealing the animals. Much to the village leader’s surprise and dismay, his own son was part of the group that had taken the livestock to sell in the market for personal gain.

The villagers were enraged by the lies their village head had been spreading. They fined Lomash’s son severely and held him and his father responsible for the thefts.

Broken and repentant toward Pastor Ghalib and the believers, Lomash begged for their forgiveness. He promised to begin supporting the church instead of opposing it, and even asked the believers to pray for his son.

Because Lomash was the biggest instigator of problems for the church, things have been peaceful between the believers and villagers since his heart has changed, and he has kept his promise.

See how missionaries just like Ghalib are transforming villages with Christ’s love.